Pregnancy is a very crucial stage in the life of women and giving birth even poses greater risk as it is a battle between life and death. There are also various complications that occur in the body of a woman before, during and even after pregnancy. Most of these are considered normal and will also heal in no time.

However, this rare case of a woman who was left with thousands of tumor after she gave birth has now piqued the interest of medical professionals and researchers.

According to Metro, Charmaine Sahadeo, 38, suffers from an extreme case of neurofibromatosis, causing painful lumps to cover her entire face, with three giant growths swamping her right leg.

Charmaine, from Chaguanas, Trinidad, has always had the condition but says the growths were largely unnoticeable until her second son Osiris, 15, was born.

After his birth the number of tumors increased rapidly, and two surgeries have been unable to stop their growth. Because of this, Charmaine is not just suffering from physical struggle of her condition but also in the emotional aspect as she’s been left too scared to attend her sons’ school for fear they will be bullied.

Charmaine is now desperately looking for a medical solution and is hoping someone from the UK, US or Australia can help her.

Charmaine says the condition has made her life incredibly difficult. She was in an 18-year marriage but she separated from her husband three years ago. Now, she is left to care after her two sons Caleb, 19, and Osiris, but she admits it’s been financially tough over the years as no one will hire her because of her condition. 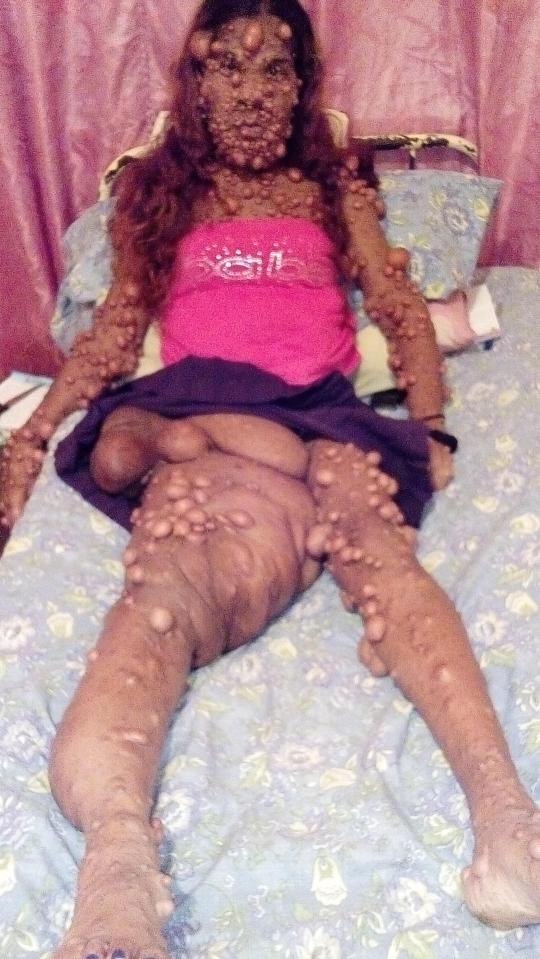 Although Charmaine has a really positive outlook in life, she finds it difficult at times because people look at her with the look of disgust in their eyes.

Still, Charmaine remains optimistic especially when she said this in an interview, “But I’m a happy person. At the end of the day I do everything that a normal person does. How could I think about doing anything to harm myself?”